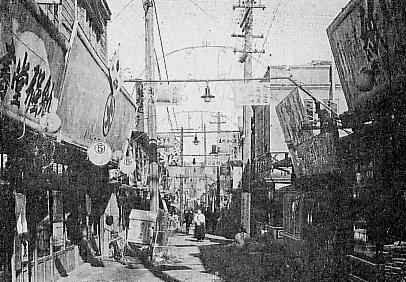 Myeong-dong was a recognized dong, or district, as long ago as the Joseon Dynasty when it was referred to as Myeongrye-bang and at that time was mostly a residential area. With the coming of the Japanese the name was changed and it became a more commercial district with shopping and trading being the main occupations.

In the boom time after the Korean War the city as a whole expanded and many new buildings were built. In Myeongdong that meant more high-rise structures and with them came department stores, shopping centers and other types of commercial and retail outlets. As prosperity grew in the post-war years the demands for fashion and cosmetics skyrocketed and it was in Myeongdong that they were satisfied both by local companies and by international brands.

By the mid 1970s the district had reached it's position as the premier shopping destination of Korea with the youthful and fashionable from all over the city visiting it not just to shop, but to see and be seen as fashion trends developed on the streets.

At the same time the central position within the city of the district has meant that it has a social and political role as well. The presence of Myeongdong Cathedral has attracted the religious as well as socially active and it is a focus point for social discourse and protest.

In the beginning of the 21st century the Korean tourist board identified it as one of the major draw for regional and global tourism and so is actively promoting and developing the district. This has lead to the introduction of pedestrians streets, promotional programs, and more well developed signage.

Today Myeongdong is the heart of commercial Seoul and there is little thought of it's origins as a humble residential district.

Along the many smaller streets in the area are plenty of small stalls selling street foods, either literally in the street or from window opening up from their small shops and kiosks.  Try some of the local favorites including deep fried sausage and rice cakes on a stick, or French Fries and sausage coated in batter on a stick.   More traditional are gyeran bbang which is a type of fried egg cake or muffin which is a tasty and nutritious snack that all people can enjoy.

For those who love spicy food try dakkochi which is a spicy chicken skewer, cooked over coals to get a BBQ flavor but with plenty of chili heat as well.

Try also the hotteok which is a stuffed small pancake with a sweet sugary filling. Great warmers on a cold evening these are a popular snack with children and adults alike.